Box Tree Moths (Cydalima perspectalis), which devastated Buxus topiary plants in and around London in the summer of 2015, should not be such a problem this summer provided plants are sprayed regularly, according to topiary expert James Crebbin-Bailey of London based Topiary Arts.

Dr Hayley Jones, an entomologist with the RHS, discussing the Box Tree Moth infestation on the BBC in 2015 said: “The key thing is that it is established – it has survived throughout the winter and is breeding, it has a foot in the door and is increasing in numbers”.

It is not the Moth itself which causes the damage, but the caterpillar, which mutates from the larvae laid by the moth. This inch long pest spread rapidly beyond the M25 and into Essex during the summer of 2015. Previously it was only found in parts of South West London. In 2011 just three reports were recorded by the RHS, with 20 in 2014 leaping to 150 last year.

It is anticipated that there could be an explosion of Box Tree moths in the spring this year due to the relatively warm winter we are experiencing.

The picture on the right shows the devastation of a Buxus Ball caused by a Box Tree Caterpillar infestation leaving a matted webbing effect on the outer sides and a mass of green excrement round the base. Since this picture was taken the plants have been sprayed with Decis by professionally qualified sprayers and are recovering.

Now about six months later in February 2016 we are encouraged to see that most of leaves have grown and the plant appears to be fully recovered, says James Crebbin-Bailey. We will continue to do a programme of spraying at 6-8 monthly intervals, depending upon how the season pans out. 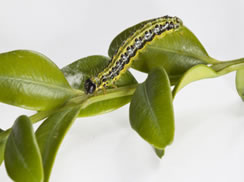 The adult moth has white, slightly iridescent wings with a dark brown band at the outer margin and a characteristic white spot on the forewing. The wing can also be brown or partly brown. The wingspan can reach 4cm. They are good flyers, although the distance they travel is not known. During the day they can be found resting on Buxus or surrounding plants. They are sensitive to disturbance and may fly during daylight if the plant they are resting on is shaken. The moth is highly adaptable to different environments and is tlerant of shade. Adults reach a lifespan of up to 2 weeks. There can be between one to four generations per year.

The female moth lays white-yellowish translucent egg clusters deposited on the top and under side of box leaves, consisting of 5-20 eggs that are very difficult to spot. One single egg cluster can spread over an area of 20-30 cm diameter on a box plant. Once hatched, the caterpillars are characterized by black stripes with white dots on a light green body with hairs and a shiny black head. 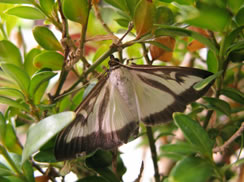 The caterpillars feed on the leaves of Box trees, resulting in defoliation. They can attack the bark of box trees causing them to dry out and die. An infested hedge can contain several hundred of the caterpillars, which leave a ghostly trail of sticky webbing in place of the foliage and creating leaf skeletons.

Pheromone traps are essential for every garden with box / Buxus. They are the first line of defence as they are a good indication of whether or not you have Box Tree Caterpillar. If you find the Cydalima perspectalis moth in the bottom of the trap you will need to check your Buxus plants for signs of egg clusters and caterpillars. If a mail moth enters your garden you need to capture it to prevent it from breeding. If a female moth enters it is likely it’s too late, as she will lay eggs on the box leaves.

The pheromone traps contain a lure, which is placed in the upper section of the trap and a small amount of water is put in the bottom, to prevent the moth from escaping. The lure will attract the male moth. There are four lures that come with each trap which need to kept cold, or frozen until use. Each trap covers an area of 0.4h (just under an acre) and each lure will last 5-6 weeks depending on infestation in your area. James explains that he can supply the Pheromone Traps £33.00 + £3.00 p&p. www.topiaryarts.com

What to do when you see the caterpillars

Spraying – Mixed opinions – you cannot spray as a preventative. Bacillus thuringiensis is a parasitoid that acts on small larvae causing muscular paralysis when they start nibbling the box leaves they will be ingesting the pesticide. Biopesticides based on Bacillus thuringiensis are usually the preferred option due to their limited impact on the environment. Products such as Bayer Provado can be purchased from most garden centres or stores and will need to be applied to the Buxus every 10 days.

A professionally qualified sprayer will use Decis, this acts on contact with the caterpillar. This will need to be carried out at 6 week intervals throughout the season – end of March to October. The season varies according to climatic conditions.

Physical control by cutting off infested material, picking off eggs or caterpillars, is also effective. However, feeding the caterpillars to birds is unlikely to be successful due to the toxic levels of Buxus ingested by the caterpillar – what is tasty to the caterpillar is not so for the birds.

The natural enemy of the caterpillar and moth (Cydalima perspectalis)

Wasps and Asian hornets are considered to be the natural enemy of the caterpillar and have been observed to prey on the larvae and birds on the moth. However, predation by birds is low, probably due to the high levels of toxic alkaloids digested by the larva.

Nemotodes: Steinernema carpocapsae are pathogenic nematodes that attack caterpillars. Laboratory studies have shown that they will kill Cydalima perspectalis, therefore they have potential for control of this pest, but effective control is reliant on high humidity levels around the leaves. S. carpocapsae are available for gardeners (as Nemasys) and to professional growers (as Capsanem).

For box plants in gardens, insecticides containing pyrethrins (Pyrethrin is synthetically made by industrial methods, but it also naturally occurs in chrysanthemum flowers) should be effective against the caterpillars.

Lastly, states James, an important point is to try and protect the box plant by strengthening its immune system – Feeding and we also use Effective Micro-organisms (EM). EM consists of the following five families of micro-organisms: Lactic acid bacteria, Yeasts, Actinomycetes, Photosynthetic bacteria and Fungi that considerably improves the quality and fertility of soil as well as the growth and quality of plants.

At the end of the day says James, this is just another spraying routine for a plant and if we are all vigilant and take measure to help eradicate this pest, we stand a better chance of saving our heritage gardens, as well as our carefully grown Topiary.